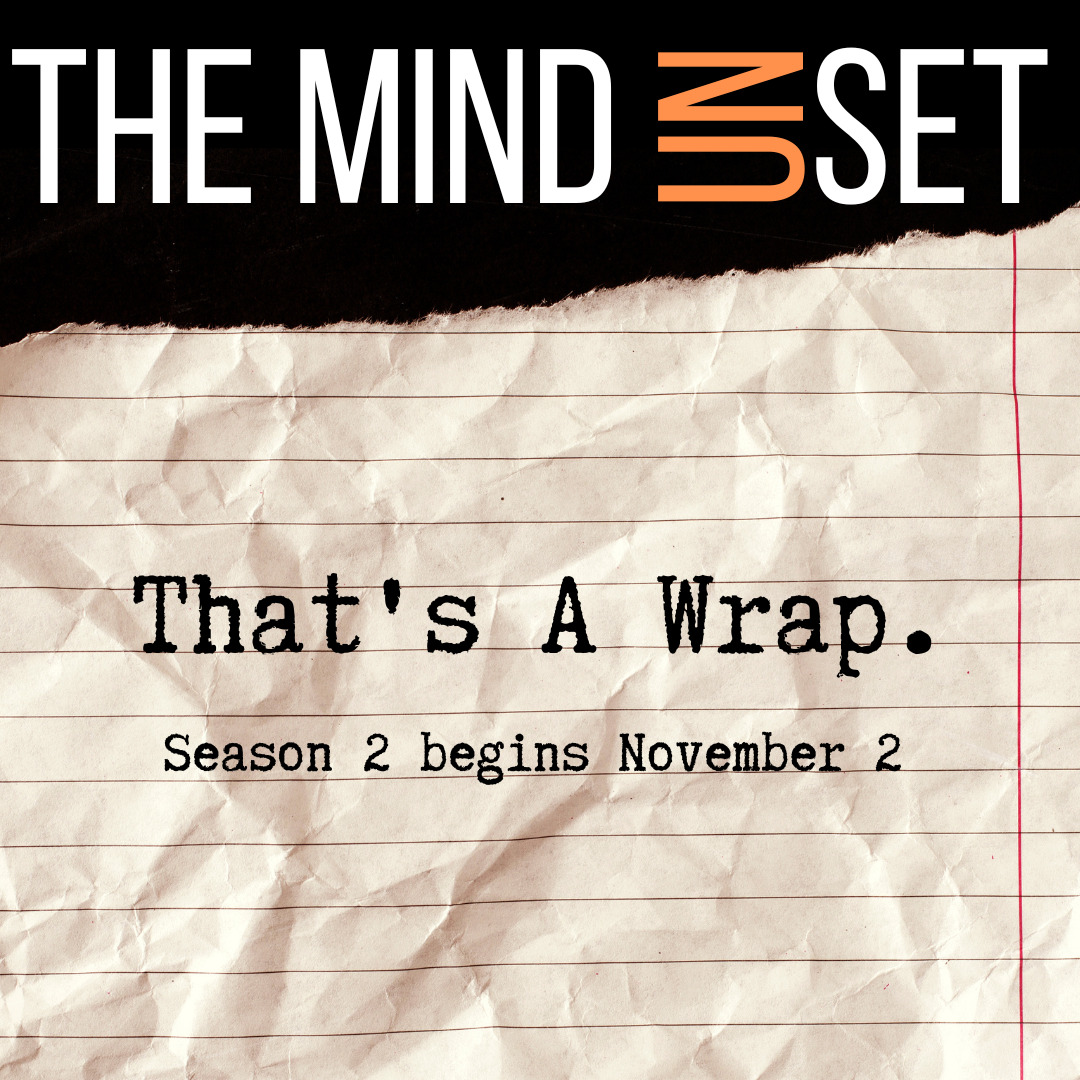 “Ready is an illusion. You’re never ready. There will always be distractions and detours to test your commitment. But those tests aren’t always about exposing your weakness, they can also expose strengths.”

In this episode, I talk about my guests, and why some solo episodes were the way they were. I answer a few listener questions and end with one of my favorite songs.

14 weeks ago I was freaking out. We had been prepping for about a year and were about to go live with Episode 1.

I had no idea what was going to happen. But the goal was simple. Make positive art and be in a different place at the end than I was at the beginning.

As Rumi wrote, the path rarely appears until you start walking.

We can always delay our transformation by telling ourselves things like I’m not ready, I don’t have the right equipment, the right guests…

But I believe ready is an illusion. You’re never really ready. There will always be distractions and detours to test your commitment. But those tests aren’t always about exposing your weakness, they can also expose strengths.

Thank you for being here for Season 1. I hope you come back for Season 2 which begins on Wednesday, November 2.

Alright. Mind blowing to think Season 1 is in the books. You know that feeling when the holidays are approaching. So much build up and then whoosh… it’s gone. That’s how I’m feeling right now.

Right out of the gate I want to thank some people who’ve been early supports to this show.

Coast Mastering. Coast Mastering is the premier audio mastering facility in Berkley California. In addition to mastering amazing records, they specialize in audio restoration and archiving as well. The company is owned and operated by multi-Grammy Award winning engineer Michael Romanowski. Amazing people out there and I cannot thank Coast enough for their support.

DiCroce Law. Over there in Shamong, New Jersey. The name is the same because it’s my older brother. Fun fact: Shamong is trying to position itself as the pot growing center of the Garden State. I really hope this happens and if it does, I’m going to lobby for them to change their name to Shabong. C’mon Michael, make that happen.

And to the monthly patrons who jumped on early. Thank you. Every penny of support we receive goes right back into the show to help cover our monthly expenses, things like remote recording software and our hosting platform.

Okay… you know… 14 weeks ago I was freaking out. We had been prepping for about a year and were about to go live with Episode 1.

I had no idea what was going to happen. But the goal was simple. Make positive art and be in a different place at the end than I was at the beginning.

As Rumi wrote, “The Path rarely appears until you start walking.”

We can always delay our transformation telling ourselves things like, “I’m not ready, I don’t have the right equipment, the right guests…”

But I believe ready is an illusion. You’re never really ready. There will always be distractions and detours to test your commitment.

But those tests aren’t always about exposing your weakness, they can also expose strengths.

My first guest was an amazing kick-off to the show. Dustin Klein was so supportive and kind. He didn’t have to do a new show. I had no public facing out there at the time and all he had to go on was my pitch email. I had a blast talking to Dustin and I’d love to have him back on the show.

In between each guest, I did the solo essays. People have asked why this format? Why not all interviews or all solo episodes.

Well, everyone is doing interviews. As a new show in a world with 2 million podcasts online, how do you differentiate yourself? You can’t. It’s all been done.

As a new show, I had no previous format to live up to. I had no audience or expectations that I needed to worry about and I wanted to try something different.

It was storytelling that stemmed from personal experience, but put out there in a way that it was relatable. I wanted people who might be feeling the same thing or asking the same questions to be able to insert themselves into the story.

But every story had to have an uptick at the end. Inspire. Encourage. Those were the parameters.

Again, the exercise for me was to not obsess or over-think the process to the point of paralysis.

Strong Coffee. Strong Women™ was a title I had in my head for a while and I just didn’t know what to do with it. As it happens, I think its a wonderful opportunity to partner with a coffee company that fits our shows vibe and it gives me the chance to feature really cool women.

Tayla Lynn… what can I say about her episode? Fun, quirky, honest as hell. She’s an amazing woman who is unflinchingly honest about her life. She was a wonderful guest.

Dr. Gladys Ato… She was so generous with her time. We had a technical issue and I had to ask her back to finish the interview.

My wife Melody. I have to tell you, that was a very hard conversation. I’m not sure why but knowing someone so intimately makes it really hard to ask them questions in an interview setting. Melody designed the website and she’s been my cheerleader for 16 years. This show would not have come to be without her. So, thanks babe.

There were quirky moments, technical glitches and stuff that you hope never makes it to the audience but the show goes on.

And to say it again, we are neophytes in the podcast space but we now have a body of work that we didn’t have 14 weeks ago.

It’s a slow progression. And I’m really proud of what we did.

My goal was to be in a different place than I was at the beginning and discover something new along the way. I’m not trying to tell people how to live their lives. I’m simply telling my personal story and wondering out loud.

Steven Pressfield, author of the transformational book, The War of Art, says we find out who we are by the works we produce. It’s so true.

I’ve read The War of Art countless times, given it as a gift and yet I still wrestle what Pressfield calls the resistance. It comes in many forms and most recently when I was putting this show together and trying to figure out if I was going to be all subscription-based or a free channel.

I’ve had some comments about our Support the Show page and why we don’t have a Patreon page or offer exclusive content and I thought I’d just address it.

Before I began this journey, I sought council from other creatives in the space and I do have a lot of experience from my time in the music business. When you talk to artists or creators who aren’t financially well-off, it’s kinda the elephant in the room.

Several people advised me, in addition to the free show, I should do Patreon channel and produce a weekend edition of the show that would air only to paid subscribers.

Aside from doubling my workload, Patreon and exclusive pay-for-extra-content enhancements have never really been an attractive option for me. Now… let me just say, if you’re a creator – I totally understand putting exclusive content behind a paywall.

I’m not judging anyone here. but for me, it’s a larger issue.

From the time I began my journey as a musician when I was 18, artists and musicians have been made to feel that asking to be paid for their art was a negative thing.

Personally I believe it’s well-past time to normalize artists and creators being allowed to ask to be paid for what they create without them having to create more or offer exclusives.

If your life is enhanced by a musician or artist you should never be offended by them asking to be compensated for their work. That doesn’t mean you have to feel obligated to contribute.

This is a topic I could talk for hours about but I won’t.

As a show, I will continue to keep the content free for everyone. We say we’re listener supported because it gives you, the listener, a vested interest in the show. You’re paying as you would for Netflix or Amazon Prime. And your contribution keeps me from having to place intrusive ads into the episodes.

So… that’s the skinny on the contribution page.

So, before I end, I got a couple questions from subscribers and I thought I’d briefly answer one or two:

Several of you asked what was my favorite solo episode?

Of the solo episodes, Rediscovering Discovery, because it was fun to produce the sound design. Also, it was the first big creative block I hit and turning the block into the piece itself felt pretty rewarding. It was fun to drive to the church. All of it.

The Best Advice. I thought it was really well written and took you on a journey that started in one place, swung wide and then dropped you back into the box at the end. I got some pushback on the that one but I’m not sure the people that pushed back even listened to the episode. I think they just assumed I was giving advice. I probably could have picked a better title.

But overall, Rise and Shine was my favorite. I think it’s strong from top to bottom.

Why are you taking a break? Aren’t you afraid to lose momentum and your audience?

Yes. I am acutely aware that  audiences are fickle these days people and it might mean losing some momentum.

Trust me. There’s no break. It’s just a period of catch up. For Season 1, in the beginning before we launched, I was working seven weeks out. But the time we reached this episode, I was two weeks out.

The minutia of producing a show catches up. It’s all consuming. I’ll be working constantly over the next 4 weeks to be ready to launch Season 2 with new trailers, new graphics, new guests, some new merch, and new story lines.

I hope you’ll be here.

Okay… If you’re on the email list, don’t ever hesitate to drop a line. let me know you’re out there.

I’ll keep you up to date until Season 2 begins on November 2.

And you know what I’m gonna say now… Until that time… Be nice. Do good stuff.