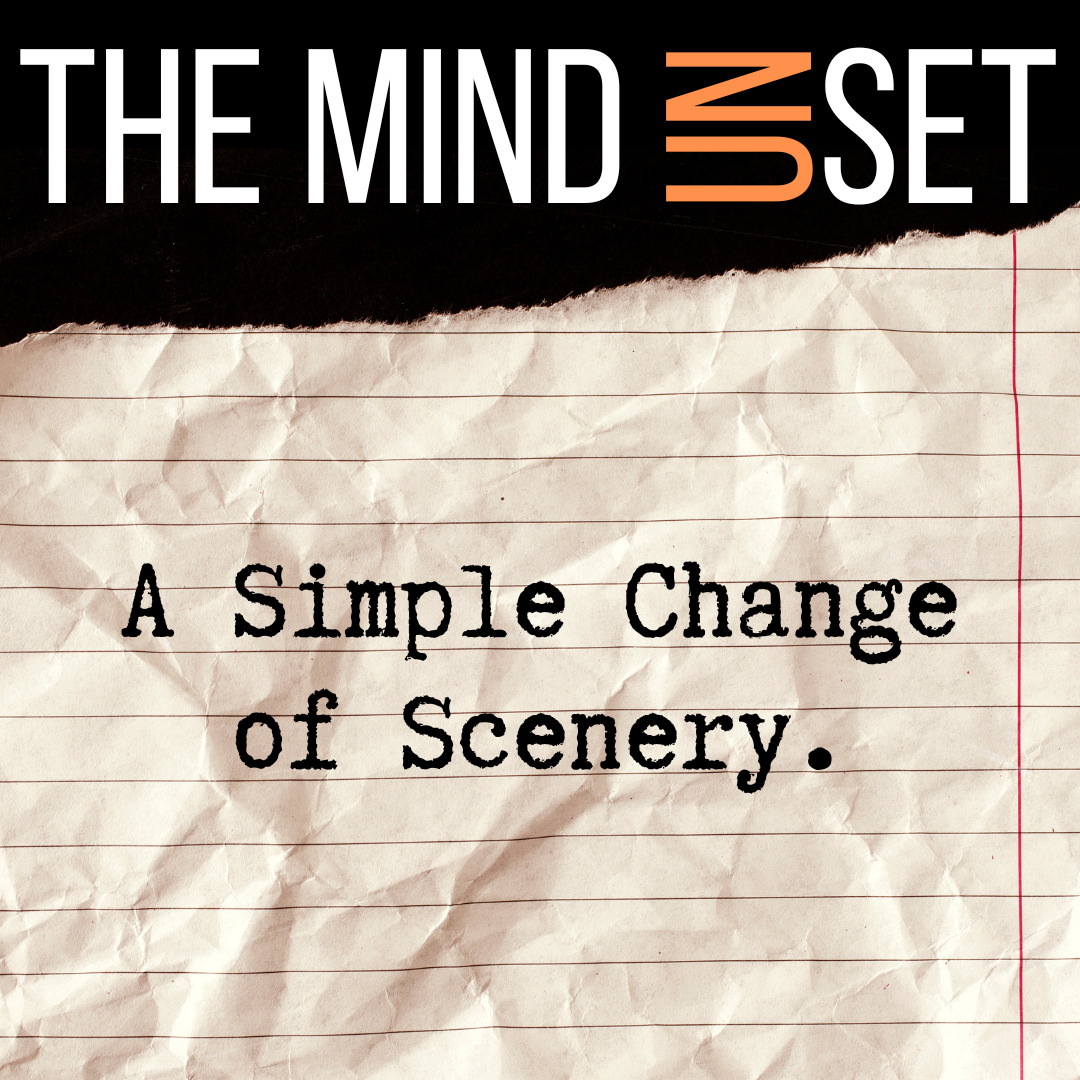 Episode 013 – A Simple Change of Scenery

“Personal evolution is a change of perspective and a maturation as well as a shifting view of yourself in the world and in your life.”

Something as simple as a Sunday drive can change everything.

Objects in mirror are closer than they appear.

If not for the fact that it’s inscribed on every passenger side mirror in North America, this innocuous little sentence might have never seen the light of day.

This safety warning is designed to expand a driver’s view reducing the likelihood that they misperceive what they see to the immediate right of the car. And in order to achieve a wider field of view, the mirror is curved, which distorts what the driver perceives.

Are we missing something here?

Could the auto industry’s attempt to insulate itself against a litigious populous be something else entirely?

This inscription… an existential tap on the shoulder?

An invitation – to examine our own perceptions?

Tune in to find out!

To this day one of my favorite forms of entertainment and perfect to break the monotony that comes when you work from home.

We wake up early, grab a cup of coffee, crank up the radio and drive. Here in Baja, we usually head out into the desert. It rained this week. Something that hasn’t happened for 18 months.

And I love the desert after a rain.

This morning, Mel ran in for the coffee. I waited in the car. And waiting in the car can’t happen without me obsessively wondering about that grammatically awkward sentence.

Objects in mirror are closer than they appear.

If not for the fact that it’s inscribed on every passenger side mirror in North America, this innocuous little sentence might have never seen the light of day.

This safety warning is designed to expand a driver’s view reducing the likelihood that they misperceive what they see to the immediate right of the car. And in order to achieve a wider field of view, the mirror is curved, which distorts what the driver perceives.

So by distorting a drivers perception in one way, you enhance persception in another

Are we missing something here?

Could the auto industry’s attempt to insulate itself against a litigious populous be something else entirely?

This inscription… an existential tap on the shoulder?

An invitation – to examine our own perceptions?

Let me back up a bit. Birthday’s and New Years are not my favorite. Commemorative type occasions like these tend to push me sideways a bit. Trigger a period of reflection, which may explain the preoccupation with side mirrors.

This most recent birthday sent me scrambling through worm holes of old notebooks. I don’t remember what I was looking for but it’s unimportant.

I ended up in the Wayback Machine, mulling over past lives that, without photographic evidence, I might never believe existed.

Never-the-less, my scrambling came to an abrupt halt when I found a scrap of paper. On it, a date and a short poem written in my handwriting.

I don’t remember writing it back in 2007 and I’m not sure how it escaped the Great Conflagration of 2020 – when I tossed – one by one – 35 years of  journals, lyrics books, and photographs into a burn barrel.

It was a cathartic January evening spent with my good friend, Glenlivet, ruminating over the nature of existence, my hairline in the 90’s, and whether or not I’d regret reducing my entire history into a pile of ash.

It was a note left to be discovered – exactly as it was – by my future self. Empirical evidence that things were to be different many years ahead. It was as if I knew – I wasn’t ready at the time, yet hopeful I’d get there eventually.

This many years later with – an amended perspective and some revised ideas about perceptions and mispercpetions, here I am.

That’s a bold statement. On every attempt to record this piece, I kept tripping over it. It came out weird.

I believe it was my subconscious calling bullshit. It caused me to wonder if I had I changed my perspective or was I just saying that to make myself feel better.

To find out, I went  down the rabbit holes… diligently searching for a sign I was almost certain to not exist. And once I found it, connect it directly to the train of thought I was originally on. But I’ve always believed that looking for a sign was a sign.

I swear that all makes sense.

In one of the rabbit holes I discovered an article written about evolution as it relates to personal development and the definition put forth read:

To be honest, I started to feel like I didn’t really have a firm grasp on the relationship between perspective and perception and that’s a little embarrassing to admit but, I just thought I knew enough to keep it straight.

Perspective is the lens through which we see the world. Our point of view.

Perception is what we interpret things we see to mean.

As it turns out, our perception is shaped by our core beliefs. Like the filters on a photographers lens, our beliefs affect how we see.

But often times those core beliefs are formed when we’re children with an overly simplistic child’s perspective.

Those beliefs can be full of assumptions that end up not being true yet we base our entire lives decisions on them. [pause] Think about that.

Basically, we plan a course of action based on information received from a distorted image.

Not understanding this for the longest time caused a lot pain and frustration.

I had a lot of questions. I didn’t like the way I viewed certain things, but never understood that there was no way to change how I viewed things without first, examining what I believed.

But let’s be honest, facing uncomfortable facts or beliefs we hold about ourselves isn’t a fun exercise. Life’s hard enough.

Get up early to get the kids to school
Sit in traffic on the way to a stressful and unfulfilling job
Sit in traffic on the way to the market after a full day at your stressful and unfulfiling job
Stare mindlessly at your phone in the check-out line
Look around and upbraid everyone else for staring mindlessly at their phones
Internally chastise the check-out girl for not realizing how precious your time is
Get home. Cook. Clean up

And with the remaining time and energy you have left… let’s face some uncomfortable truths about ourselves.

Yeah, not so much.

They didn’t teach this stuff when I was young.

In highschool along with Home Economics and Sqare Dancing, I vaguely remember a course called, Interpersonal Realtionships, but it didn’t include anything like this.

College? No. No Self-Developement 101 or Intro to Mid-Life Revelations. Hell, I didn’t even know the White House burned to the ground in 1814 until I read about it in my early 30’s.

Maybe you’re one of those enlightened souls who’s marched through life with a fully developed sense of self-awareness and a full understanding of the the relationship between perspective and perception.

Me, I was a self-involved genius until the walls constructed with mortar of delusion came crumbling down.

The last 20 years seem to have vaporized. I remember the events of September 11 and I remember yesterday.

And somewhere in between, 2012, I managed to quell the fearful voices in my head and – disregarding all sound advice – quit my job, sold my house and almost everything I owned to move onto a sailboat with the love of my life – putting on notice any core beliefs that survived.

For the next ten years, I’d live with woman and a dog in a space about the size of most of your bathrooms.

No television. No car. Talk about distorting your perception. But just like the mirror, that distortion enhanced my perception in other areas.

The filters on your lens. Or… your lens entirely.

Science proves that a simple change of scenery improves brain plasticity. By doing something as simple as working in a different space or breaking your normal routine with a walk through the park forces the brain to become hyper aware that somethings different. In this heightened state, the brain becomes more receptive to learning.

If you’re seeking a transformation or a progression away from a pattern of thinking that doesn’t feel like it suits you anymore, start simple.

I don’t suggest this as some sort of moral advice. There is no “supposed to or should” rather this is how I stumbled through a metamorphosis that took the better part of 20 years.

These days, I use my interaction with circumstances that challenge my beliefs as training.

An opportunity to see something from a different point of view. A chance to take myself out of the immediate rush to judgment and step back as neutral observer.

I fail at this a lot.

When I do fail, it gives me an opportunity to extend myself some grace. Something I’m not very good at.

And what makes that process bearable or devastating is how we view it. Glass half empty. Glass half full.

I began this piece after finding an old poem. It only took a second or two to find out is was not my poem but one written by the late-great Mary Oliver.

And this is me processing her wisdom from all those years ago.

On that scrap of paper it said, “Someone I loved once gave me a box full of darkness. It took me years to discover that this, too, was a gift.

It has indeed taken me years to unwrap that gift. I know now, that tossing my entire history into the flames that night was more than symbolic. Incinerating those old ideas, old emotions, and outdated beliefs marked not only an end but a beginning.

And here I was thinking it was just a benign Sunday drive for a cup of coffee and a little change of scenery.