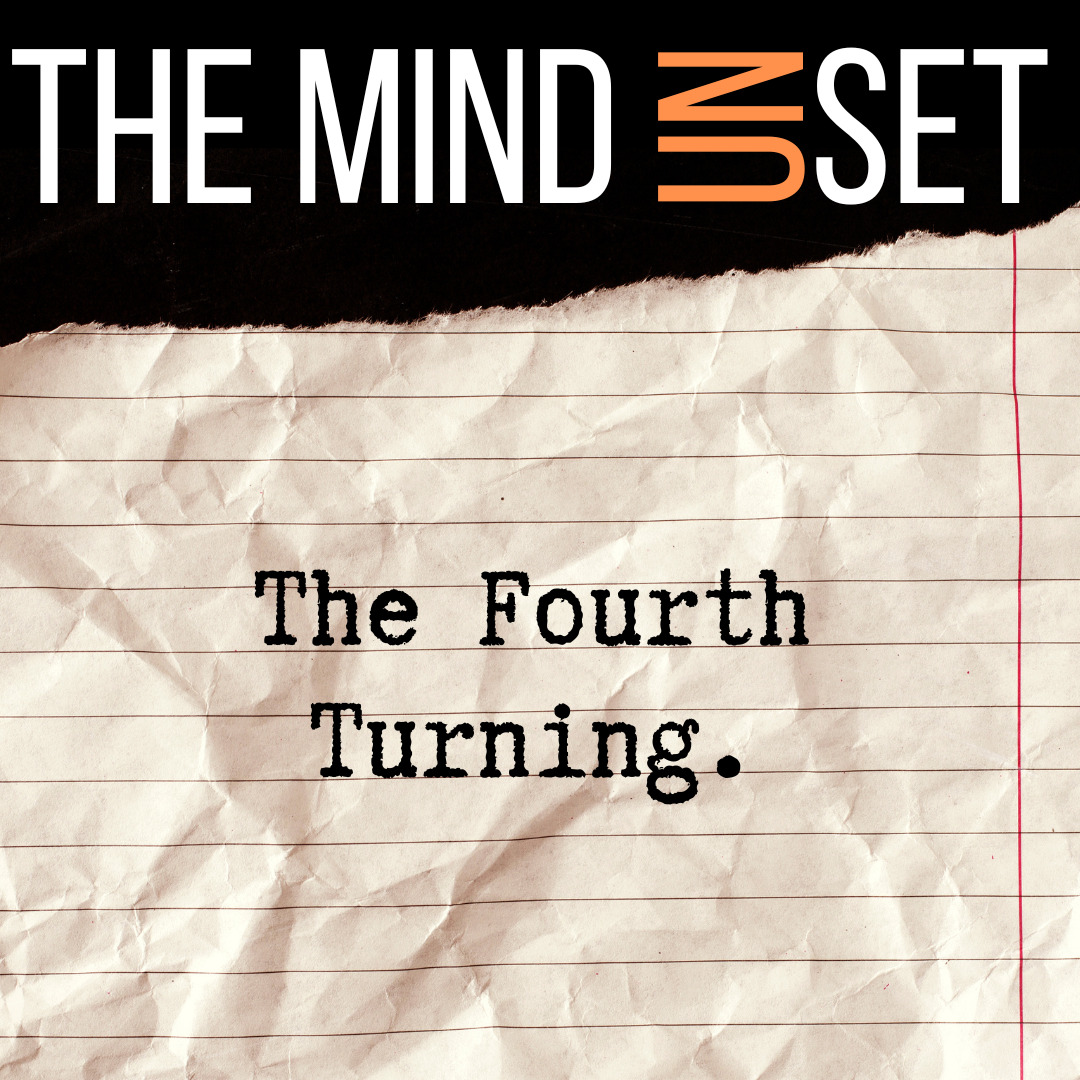 “In every instance, Fourth Turnings have become founding moments in America’s history, refreshing and redefining the national identity.” – Neil Howe

We’re surrounded by patterns, in nature and in history. And these patterns remind us that everything will be ok.

In 1965 British psychoanalyst, Elliott Jaques coined the phrase Midlife Crisis. He described it as a period in which we come face-to-face with our limitations, our restricted possibilities, and our mortality. A period of sudden awakening.

Ironically, 3000 miles to the west, America was in the midst of its own midlife crisis. Political change, social change, space travel and great music defined the years 1965 and 1984. America was questioning the norm, searching for meaning.

Was it a once-in-a-lifetime awakening or something else? Part of a recurring pattern that’s happened before.  A turning from one generation to the next?

Episode 11 is all about patterns. And… apples. Well, they are connected. You’ll just have to listen to find out how.

Patterns. They’re everywhere; patterns in behavior, diet, speech,  and nature. And its here – in nature – I discovered there are 5 main patterns or visible consistencies.

When I read that there were 5 main patterns in nature, I remembered a strange connection…or pattern if you will, with the number 5. This is how my brain works. This is attached to that, which triggers the which-a-ma-call-it, and so-on and so-forth.

I needed to see if there was a connection between the number 5 and where I was going with patterns.

The number 5 memory sent me rambling through old files until I found a speech that I’d written for a presentation in 2019. I’m not sure it would qualify as a pattern, but it’s certainly a peculiarity.

Do you know about the number 5? It’s been trying to get our attention for a very long time.

So, we’ve got the 5 main patterns in nature but here’s where it gets interesting.

5 is also the number of balance.

There are 5 days in the work week.

5 vowels in the English Alphabet

And 5 arms on a starfish.

There are 5 Books of God’s Law

5 boroughs of Manhattan and 5 Jacksons.

There are 5 Epochs of Civilization

There are 5 stages of grief, 5 guys named Moe and – when cut horizontally – an apple has five seeds in the shape of a five pointed star.

That’a lot to chew on.

All of that brings me to 196…5 and a British physician and psychoanalyst, named Elliott Jaques. Mr. Jaques is credited with inventing the phrase, Midlife Crisis. He did this in a paper he published called, Death and the Midlife Crisis.

In it, Jaques described the midlife crisis as a period in which we come face-to-face with our limitations, our restricted possibilities, and our mortality.

In researching this piece, I was simply trying to figure out whether or not the Midlife Crisis was still a thing, a spiritual reckoning or just a social construct for those with the benefit of enough time on their hands to ponder their life’s journey.

And as it turns out, it might be something so much bigger.

In 1965, America was still mourning the loss of JFK just two years before in November of ‘63.

The Vietnam War was grinding into it’s tenth year.

The Beatles. The Rolling Stones.

The birth-control pill was legal nationwide in the U.S.

Women were working. They gained financial independence, shifting the institution of marriage.

Looking back – it’s as though our entire country was experiencing a midlife crisis. A once in a lifetime cultural shift. Or was it something else – an awakening?

An awakening that’s happened before. And just like with nature and our favorite number 5, part of a recurring pattern.

Two men, William Strauss and Neil Howe believe it was. And when you read their book, it’s hard to argue.

They are the authors of a provocative book with an incredibly long title, The Fourth Turning: An American Prophecy: What the Cycles of History Tell us About America’s Next Rendevouz with Destiny.

Yeah, that’s a mouthful. And there’s no way I’m going to break all 400 pages down into this little essay but here’s their theory in a nutshell.

Strauss and Howe went back through 500 years of history and discovered a repeating pattern. Modern History has been following a particular cycle. Every 80 or 90 years – or roughly the period of one long human life – a great civic upheaval occurs.

They conclude that these upheavals occur because as a generation ages, it looses generational memory… It forgets how to run a government from the top down and create and manage institutions that actually work. We then have to relearn how to do it during a period of crisis.

They break each 80-year cycle down further into four 20-year blocks or “turnings,” Hence the name.

The first 20 years or First Turning is a High. It’s an time of optimism and enthusiasm. Institutions are strong. The collective consciousness is, for the most part, moving in the same direction.

The second 20 years or Second Turning is an Awakening. Institutions are attacked. Non-conforminty and social justice come to the forefront. It’s a period of discovery and enlightenment.

The Third Turning is an Unravelling. Institutions are weak and mistrusted. It’s a time of Individualism.

And the Fourth Turning is a Crisis. We’re in one now. It’s a period of upheaval.

Throughout our history, America’s history, each of these 80 year cycles have been remarkably similar.

Lets go back about 80 years, 1942. On the heels of the Great Depression, you get the end of WWII.

80 years before that, 1865 the assassination of Lincoln and the end of the Civil War.

80 years before that? The end of the Revolutionary War and before that, the War of Spanish Successtion in Europe.

If you concentrate on the most recent generational turning, the one we’re experiencing right now, we have to go back to the end of WWII.

1945 – 1964, the First Turning. Our HIGH. Victory after WWII. It’s a time when instituions are strong. The distribution of wealth is still fairly even. You can work a regular job and still afford a house. It’s a time of conformity. It was the era of Rock-n-roll, Elvis, the space program, and muscle cars.

Of course it wasn’t an all-inclusive high. There was still segregation, racism and no protection for our LGBT community. Our high ended with the assassination of John F. Kennedy in November of 1963.

1964 – 1984: The Awakening… Ironically it’s the period in which Mr. Jaques writes of his growing dissatisfaction or Midlife Crisis. During the awakening, Institutions are attacked under the guise of personal and spiritual freedom. People start to tire of social discipline. It starts on the college campuses. We had Martin Luther King Jr. and the Civil Rights Movement, The Gay Rights Movement, Women’s Liberation, and Vietnam Protests. Student Protests and Woodstock. We had great music, movies, evocative art, literature and the first Macintosh computer. Our awakening ended with the re-election of Ronald Regan.

1985 – 2008: we entered the Unravelling… things start to get tense. It’s a period that stands in direct contrast to the High. Institutions are weak and mistrusted. We saw the collapse of the Soviet Union. The rise of hip-hop. Black artists were illuminating the violence and injustice in the inner city. Rodney King. L.A. Riots. O.J. Simpson. Columbine, September 11, and the wars in Iraq and Afghanastan. The splitting of our national consensus took place and broke people’s values down into red and blue states. All of it transitioned with the global financial crisis of 2008 and the war on terror.

2009 began the Fourth Turning… or our Crisis. We’re in it now. Which is the tearing down and rebuilding of the nations institutions.

What’s completely fascinating is that it was written in 1997. The authors even went so far as to predict what was to come and they were eerily on target.

“History is seasonal and winter is coming. The very survival of the nation will feel at stake. Sometime before the year 2025 America will pass through a great gate in history, one commensurate with the American Revolution, Civil War, and the twin emergencies of the Great Depression and WWII. The risk of catastrophe will be high. The nation could errupt into insurrection or civil violence, crack up geographically or succumb to authoritarian rule.”

So how do we fit into this pattern? Well, that depends on when you were born. You see, each generational block or turning defines those who were born within that period. There are certain Archetypes.

Those born during the High, the Baby Boomers, are the prophets. Steve Jobs. Bill Gates. Both were Boomers and both believed at a time when computers were expensive and rare, that one day, everyone would own a computer. Bill Gates predicted an event like the Covid-19 pandemic 5 years before it happened.

Those born during the Awakening period are the Gen-Xers. These people, myself included are the Nomads. Strange how accurate that description is. The most famous of these nomads is Elon Musk. He builds things that move us from place to place. Rockets, cars… not just cars, but future cars.

That brings us to those born during the Unravelling. The Millenials. Strauss and Howe suggest the millennials will be the Hero Generation. They are the ones who’ll save the country. The future will be shaped by their values and aspirations. The Parkland High survivors, the September 11th generation and frontline hospital workers. These kids will emerge as our World War II heroes.

If the trend persists, when it’s all over, our institutions will be radically different and rebuilt from the ground up in a way that works for the next generation.

By explaining this pattern in such a clear way, this book has given me a sense of hope. It reminded me that all things are cyclical. Nature is cyclical. History is cyclical.

And just like the great forests need fire and rivers need floods to remain healthy, societies also need big events to clear out the debris and expose fresh soil so that a new generation can grow.

These events set into motion the turning over of power and wealth from old to young, and relevel the playing field.

Though painful and destructive, it’s the necessary cost for a new renaissance.

I went down the rabbit hole listening to countless interviews with Neil Howe and his best guess estimates have us in our Fourth Turning for at least another decade.

Even though the road between here and there is still fraught with peril and nothing is guaranteed, I was left feeling inspired about what’s coming.

The thought of being alive in a First Turning High Period… a new Golden Age – is invigorating, especially after the last forty  years.

Maybe it’s my own midlife crisis coinciding with the crisis we’re all experiencing in the fourth turning. I’d love to have that as a cop-out, but I don’t believe in midlife crisis’.

What happens between now and then is anyone’s guess, but we’ve made it this far. And, to wrap this up in a neat little bow woven from the relevance of the number 5 – I’ll leave you with this.

The episode now, it is through
Our history includes me and you
But It comes at a cost
So to end I’ll quote Frost
The only way out is through.