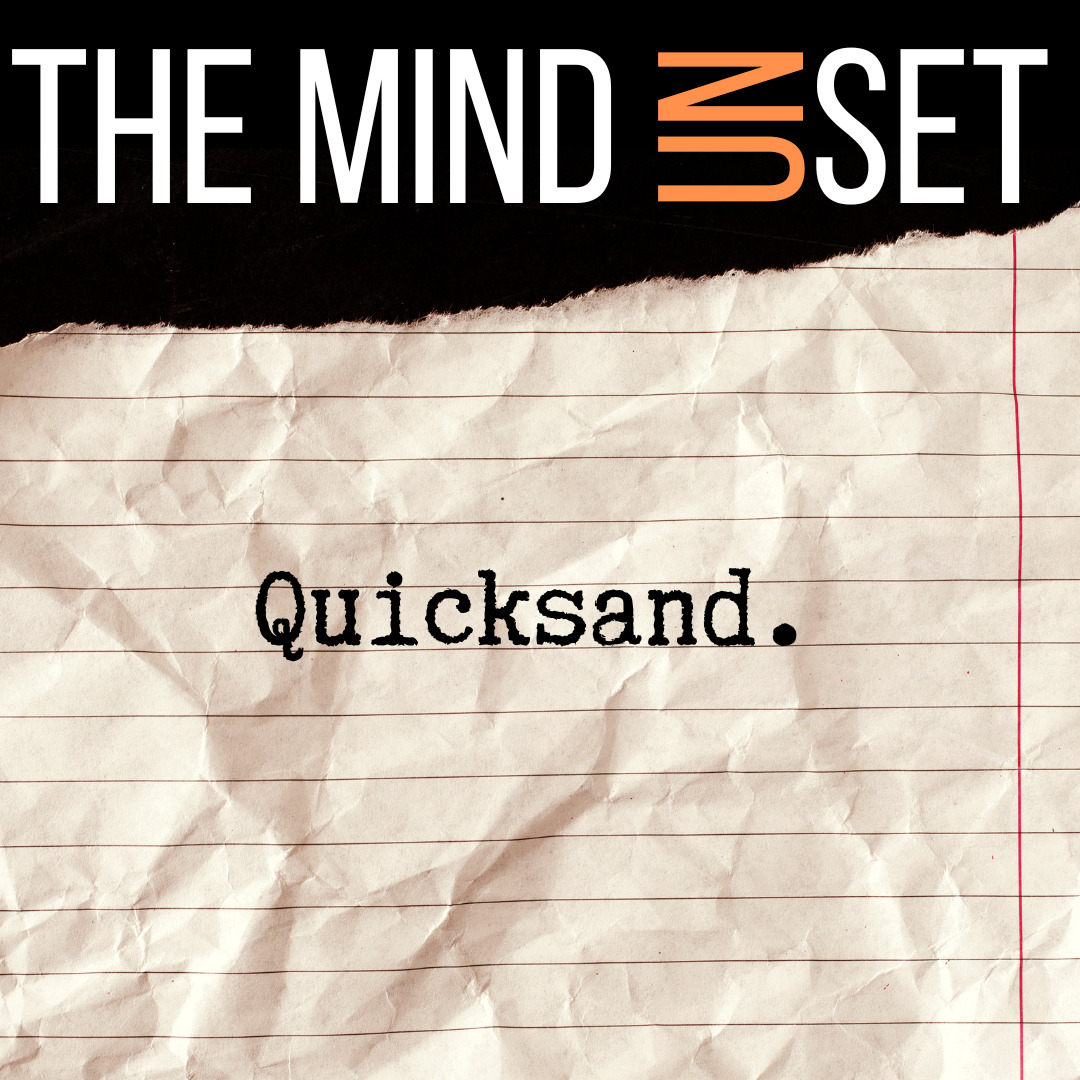 “A person often meets his destiny on the road he took to avoid it.” – Jean de la Fountaine, French Fabulist

What do Ghostbusters, the Stay-Puft Marshmallow Man, and quicksand have to do with Jimmy Hendrix, Amy Winehouse, and Episode 9?

Episode 9 – The Fatal Episode – has a little bit of everything; numerology, the laws of attraction, and a dash of insight provided by a legendary Fabulist, and somehow it all works out.

You remember the movie Ghostbusters?

The famous “choose your destroyer” scene? Where the guys are told by super natural voice that their thoughts will decide what form the destroyer comes in.

Bill Murray’s character screams, “Don’t think! Nobody think!” and almost immediately, the ominous voice says, “The choice has been made!”

Everyone is yelling, confused. The camera pans to Dan Akroyd as he says, “I couldn’t help myself!”

The form of destruction? A 100 foot tall Stay-Puft Marshmallow Man.

In the rock-n-roll world, there’s an ominous significance attached to the number 27. It’s known as the fatal year because so many rockstars died at 27 years old. Jimmy Hendrix, Janis Joplin, Kurt Cobain, and Amy Winehouse, just to name a few.

There a fatal number in podcasting too. It’s 8. The 8th episode. Some numbers have 60% as the percentage of shows that fail befoe a 9th episode. It’s called podfade.

That number – 8 – has been in my crawl since I began. And I know… just like the Stay-Puft Marshmallow Man, think and it can become your destruction.

The laws of attraction… what you think about, you attract. Well, I’ve been so bad at that for so long, I didn’t think it’d ever work now.

I mean, I thought about fancy cars, cool guitars, being on the New York Times bestsellers list, and none of that crap happened.

But now, I think about episode 8 and I can’t seem to break through it.

While you can’t be 100% sure about the origination of the quotes – like the famous one with Abraham Lincoln saying, “don’t believe everything you read on the internet,” you can find something that gets your point across.

This particular nugget? I fact-checked. It originated with one Jean de la Fountaine. He was a French guy… a Fabulist, born in 1621. 16…21.

Now… I never head of a Fabulist. I had to look it up. It’s a not a fabulous person. If it was,

I’d wanna be one.

A Fabulist is a poet. More specifically, a poet who writes fables. And Monsieur Fontaine was the most widely read Fabulist of the 17th century. But… that’s – completely irrelevant (softly).

What is relevant is the quote. He said, “A person often meets his destiny on the road he took to avoid it.”

Well, he didn’t actually say it like that, he probably said it more like [insert french google].

For two weeks, I have been wrestling with episode 9. And it’s… been kicking my ass.

It began as a piece on perspective. I told a funny story about a poem I wrote back in 2002 and how it coincided with a tragic story of my record deal that never happend.

I tied the two together in a profound and uplifting way in an attempt to demonstrate that one can indeed change their perceptions and in doing so, shirt their perspective.

I overthought the piece, went back and forth about how it was too wide a swing, not cohesive, and I put it on the back burner for later.

I then began a piece called Quicksand. I drew up a satirical look at the irrational fears we had as kids. In the 70s and 80s, quicksand was a big deal. Quicksand, the Bermuda Triangle, and gum taking 7 years to digest in your stomach.

Don’t try to pretend you didn’t believe that.

Everyone from Batman to the Incredible Hulk to Daisy Duke and the even the bionic woman herself, Jamie Sommers, ended up in some state of peril because of quicksand.

Walking to school, you know… 10 miles, uphill, each way, I was on the look out for quicksand. Nevermind that I was in the city of Philadelphia… LA has tar pits. Rationalize that.

Come to find out later in life, I wasted a lot of energy, unnecessarily… on quicksand.

The cruel joke here? About 10 years ago, my oldest brother had an accident on his dirt bike while riding alone through the Pine Barrons of NJ. He crashed… into quicksand. Real… quicksand.

Now I don’t know what to believe.

Needless to say, the quicksand episode, well, hit quicksand. I put it on the back burner for later.

I went back to piece on perspective.

No luck. I weighed it against the other pieces and held it up to the light of what the show’s about. Does it encourage? Is it inspiring?

We need to be funny. Something light. The first 8 episodes have been good but we need something more. Not just good… but different.

But – It has to mean something.

Okay, got it. Good. Funny. Different. Mean something. Shit… That’s a lot of pressure.

[wind noise] Similar to Living on the Edge by Aerosmith

We’re working through road blocks. Challenging outdated beliefs we hold about ourselves. Changing the narrative if it no longer works.

Why was I over-thinking?

Why is this keeping me awake at night?

There is nothing wrong with any of the episodes I wrote for episode 9.

The problem is that I allowed myself to backslide in the quicksand of perfection.

Funny thing, when it’s all said and done, quicksand actually exists – perfection doesn’t – yet the pursuit of perfection traps so many more people.

I did a Google search: “How many people die each year by quicksand?”

The answer: Almost nobody.

If google answers with a vaguity like that, well… we can all march on.

Here’s what the original Google, Encyclopedia Britanica, said, “Quicksand can be a mucky nuisance but – it’s basically impossible to die in the way that is depicted in the movies.”

Excellent. I can stop worrying about quicksand.

Just for fun, I searched, “How many people die by perfection?”

I expected the same answer.

According to research by the American Psychological Association, the number of people suffering from mental illnesses such as anorexia, depression, and anxiety has reached a record high thanks to a rise in perfectionism.

Because today’s world equates performance, status, and a perfect image with worth, apparently, today’s millennials feel immense pressure to outperform or outshine their peers to prove their worth.

Their answer is perfectionism.

What follows is a harsh self-criticism, depression, and anxiety. The study went on to suggest that higher rates of suicide can be attributed to perfectionism because many young professionals feel that not living up to outside approval suggests some sort of inferiority, weakness, or flaw.

Here’s the analysis and a direct correlation as it relates to perfectionism.

Back in episode 7, Rise and Shine I spoke about Negativity Bias and how our brains are hardwired to attach to negative stimulus.

Now that we have several episodes out there in the universe, we’re getting feedback. If there’s one thing I know after being in the performance business for over 30 years, it’s that you’re going to be criticized.

I got an email criticizing the show. Even though I told myself it didn’t bug me, I let it bug me. Subconsciously, I began to overthink what I was doing. Almost as if I was catering to that one email.

When I was doing music, I quickly learned to disregard the reviews. If you believe the good ones, you have to believe the bad ones.

But these days, it’s all about the review.

When producing anything that gets released into the public sphere the tendency to lean and engage is hard to resist.

I know this, and even when I thought I had a grasp on it, it reared it’s ugly head. It kept me chasing my tail and this elusive episode 9 for nearly three weeks.

Screw that. This is it. With all of its flaws, meandering storyline, and imperfections. Episode 9.

Listen, there’s an old saying about opinions as they relate to a certain body part. I won’t repeat it but I will point out that while crass, it’s as true today as it was the first time I heard it.

There is nothing more important than the continued progress toward the person you wanna be.

A person often meets his destiny on the road he took to avoid it.